The convention hosted several sight seeing excursions before the start of the convention. On Monday, a group took the American Legacy Brewery Tour. Tuesday saw the Sons at Kings Island amusement park. On Wednesday, the Newport Aquarium was visited. Finally, Wednesday evening hosted a Chimp Tent meeting in the Rosewood Room of the hotel. 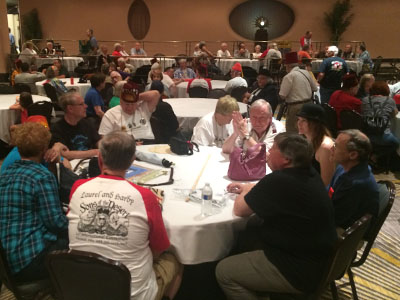 Delegates of the 21st International Sons of the Desert Convention convened at 3 PM in the Fourth Floor Foyer of the Hilton Cincinnati Netherland Plaza Hotel for a mixer. Stan Taffel read a proclamation from the Mayor of Cincinnati marking the official start of the convention. The mixer lasted for about 90 minutes, and was followed by a dinner break.

Sons returned to the Pavilion Ballroom for a photo slide show presentation showing highlights from past conventions, with photos provided by Marcia Opal. Everyone who was in attendance at the first convention in Chicago in 1978 was asked to stand. The first ten conventions were featured this night, and the rest would follow at Saturday night's program. 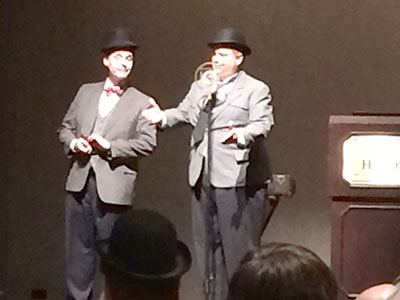 Convention Chairperson Gene Sorkin took to the stage and read the speech from the Exhausted Ruler in Sons of the Desert. Laurel & Hardy impersonators Bill Leavy Jr. (Stan) and Jamie McKenna (Ollie) then performed. Ethel the gorilla, played by Robert Thikkurissy, danced with Dave Simpson.

Flags representing all of the delegates visiting from other countries were shown on screen as they were recognized.

Special tributes were given to those who had passed away since the last international convention. Roger Gordon paid tribute to Dwain Smith. Bob Satterfield said some touching words about Lois Laurel Hawes. Stan Taffel remembered Chuck McCann. Gino Dercola spoke of Bill Furman and announced the film rooms at International Conventions will now be named in his honor.

A live orchestra played through the evening, conducted by Maestro Art Funk. A screening of From Soup to Nuts featured live musical accompaniment from the orchestra. There was also a sing along to "Let Me Call You Sweetheart" with live music.

The Parade of Tents followed. Every tent in attendance paraded across the stage, along with their tent banners, to let everyone see who is in attendance. This is a long standing tradition of past International Conventions, and is usually part of the first day of activities.

Afterwards, the Film Room and the Dealer's Room opened. 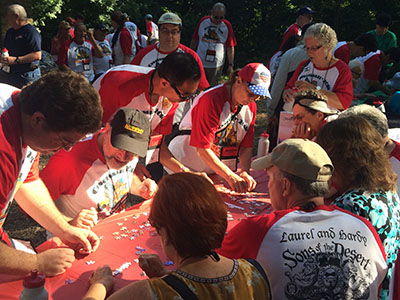 Buses left the hotel at 8:30 AM for Mount Airy Forest, the park where the convention games and outdoor activities were to take place. The traditional Pee Wee Competition and Babe Hardy Golf Tournament took place here, along with the Cincinnati Cornhole Toss. Also at the park was a puzzle solving competition that featured the same jigsaw puzzle from the film Me and My Pal. Multiple puzzles and teams competed to see who could finish the puzzle first. Teams were determined by letters on the delegate's name badge.

The games were followed by a catered picnic lunch in the park, before buses returned to the hotel. The Film and Dealer's Rooms were open during the afternoon. 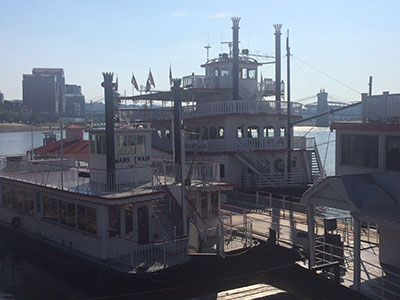 That evening, delegates took a short bus ride to board a paddle wheel boat for a cruise on the Ohio River. The cruise featured a buffet dinner, and gave everyone a chance to talk and enjoy the scenery. A band played on the upper deck.

Back at the hotel, the Dealer's Room reopened and films were shown in the Film Room. 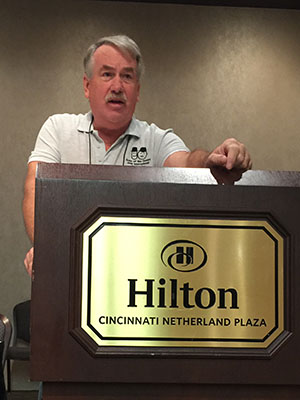 Saturday morning began with the Grand Council Meeting. This is the part of the convention when "serious" business is dealt with, including choosing the location for the next convention.

Current Intra-Tent Journal Editor Bill Oates served as the Chairperson of the meeting. Bill reported that the state of the ITJ is good. Roger Robinson spoke about the European Convention next June in Amsterdam, and other events taking place in Europe. Dennis Moriarty spoke about the annual Laurel & Hardy Festival in Harlem, Georgia. He also reported that the L&H Museum in Harlem will move down the street to the old theater building, where they will have more room.

Cliff Sawyer then proposed the next International Convention take place in Providence, Rhode Island on June 24-28, 2020. The vote was unanimous, and the next convention will be held there.

The next event was the trivia contest. Quizmaster Rick Greene (who co-hosted the very first convention trivia contest in 1984) was joined by first-time Quizmaster Brad Farrell (four-time winner of the contest). David Rodriguez (who has won the contest 3 times) served as the scorekeeper. 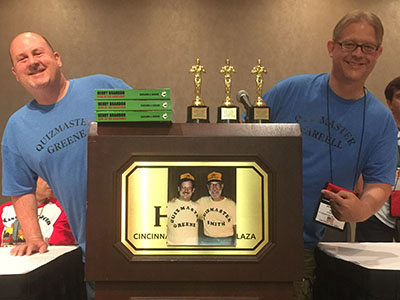 There were four teams of three people, with 10 rounds of questions. Each round, the questions increased in difficulty (and points). A total of 49 points were possible. With a total of 40 points, the winning team was "So Long, We're Going Bye-Bye" featuring Ralph Sorrenti, past convention Quizmaster Henry Sorenson, and Dave Greim. In second place, with 39 points, was team "Hydrophosphates" with Chris Jaunsen, Randy Skretvedt, and Nasa Vlachou. In third place was "The Lower Elements" with Mike Glazer, Jim Dallape, and Paul MacLachlan. Rounding out the competition was the "Detectives Certainly Do Think" team with Jay Kohlenberg, Dean Garrett, and Nina Anderson. 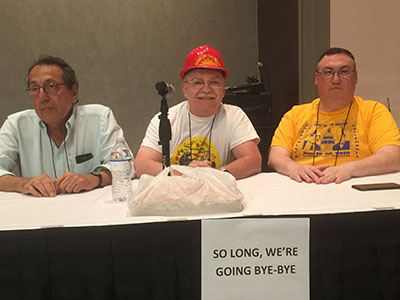 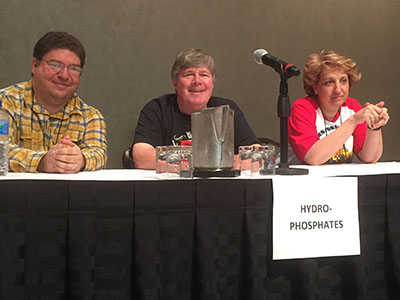 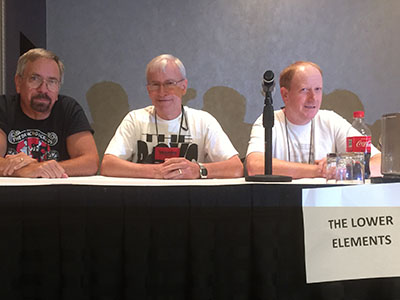 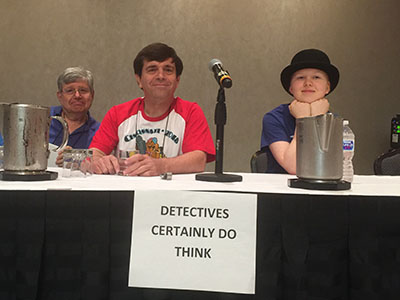 Following a break for lunch, Irv Hyatt gave a presentation on Laurel & Hardy's appearance in Cincinnati. That was followed by a talk with Randy Skretvedt. Randy shared clips of interviews he had conducted with Laurel & Hardy's co-stars and production staff. He talked about how he obtained the scripts that are in his new book, The Laurel & Hardy Movie Scripts. Questions and answers followed. Some free time followed, before dinner.

Dinner was served in the Pavilion Ballroom, where delegates were encouraged to dress up in costume. Gene Sorkin opened the gala by introducing the second part of the slide show, featuring highlights from the past ten International Conventions.

A few moments were taken to recognize the ten people who have attended all 21 International Conventions with a group photo.

Bill Leavy Jr. and Jamie McKenna returned to the stage as Laurel & Hardy. Then historian Jon Mirsalis was introduced, to talk about discovering the lost reel of Battle of the Century. The film was then shown.

During a break in the program, a photo booth was open where delegates could take several photos and leave with the printed strip of photos. Then the program continued, with the UCLA restored version of Hog Wild.

After the program, the Film Room and Dealer's Room were open.

The final event of the Convention was brunch in the Pavilion Ballroom. 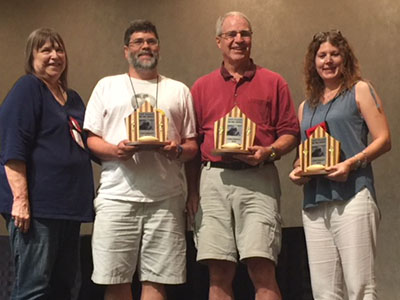 Brad Farrell and Rick Greene presented trophies and certificates to the first place winners of the trivia contest (see above). Certificates were given to all of the other participants. The first ever Dwain Smith Memorial Imposterous Excellence Award was presented to Nina Anderson, for her knowledge and enthusiasm during the contest.

The Pee Wee Contest winners were presented by Candy Rishavy, daughter of the late Elaine Johnson. Elaine and husband Roger Gillette were in charge of the contest since it began in 1984, and Candy has carried on her mother's tradition of announcing the winners. Third place went to Way Out West Tent's own Ali Sykes. Second place to Steve Rugh. The winner was Jeff Suess, Grand Sheik of the host tent in Cincinnati.

The Newcomer Award was presented for a first-time attendee that stands out and makes the convention more fun. This went to the orchestra conductor, Art Funk. 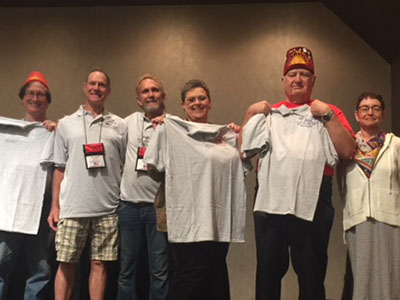 Team "T" won the puzzle contest in the park. Everyone on that team was asked to stand. Way Out West's own Grand Sheik Jimmy Wiley Jr. was on the winning team.

For the Saturday Night Banquet, awards were given for best costume. Ken Runyan came in third, Elizabeth Anderson was second, and Rita Crandall won first place.

The Brats Award was presented by Nina Anderson to Maggie Oates and Liam Oates (grandchildren of Bill Oates). 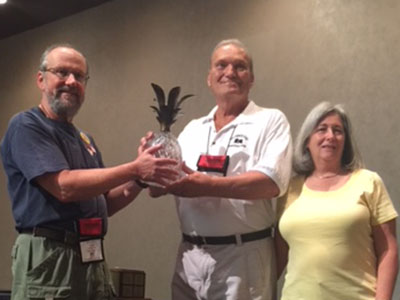 Gene Sorkin was made Grand Sheik Emeritus of the Chimp Tent, which he founded.

Alan Garfield, Chairman of the first International Convention, said a few words about that event in Chicago 40 years ago. Then representatives of each convention passed the microphone (followed by the large, crystal pineapple) down the line until it reached Gene Sorkin. Gene handed the pineapple to Cliff Sawyer, who will spend the next two years with it as a reminder of all the work that is ahead of him.

Thanks were given and the convention came to a close.


Thanks to Brad Farrell, David Rodriguez, Bob Satterfield, Jimmy Wiley Jr., and Kris Wiley for photos and in the preparation of this report.