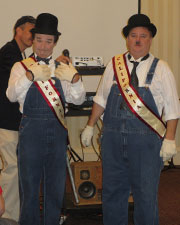 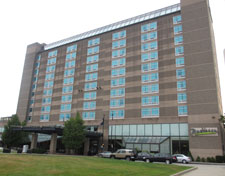 The Radisson Hotel in downtown Manchester, New Hampshire was the location of many of the convention activities. Most delegates arrived at the convention on Wednesday, checking into the hotel throughout the day. Convention registration opened this morning, giving those in attendance a chance to pick up their convention t-shirts and "goody bags" full of registration information, donated items from many tents, and a tri-corner hat in place of a convention fez.

On Wednesday evening, the Radisson was the site of the 1934 Roach Studios Cocktail Mixer. The event took place in a meeting room right off the main lobby of the hotel. Cake was served and two old-time radio shows were recreated live for the audience. There was also a re-enactment of the cake cutting during the Hal Roach Studios 20th anniversary party, with Thelma Todd's cousin Jenny Blatchford standing in for her.

The 18th International Sons of the Desert Convention officially started this morning, with an orientation by one of the founding members of the Sons of the Desert, Chuck McCann. A portion of the hotel's Grand Ballroom had been set up with rows of chairs to host most of the convention activities. Throughout the convention, silent films were shown in a real theater (as opposed to a hotel meeting room) in the nearby Carpenter Public Library. 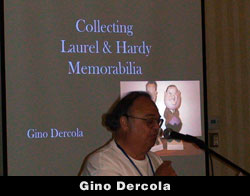 Before lunch, delegates gathered for an Author's Panel hosted by Scott MacGillivray (Laurel & Hardy: From the Forties Forward). Scott discussed his personal interest in the later films of Laurel & Hardy and some differences between the first and second editions of his book on the boys. Chuck McCann also participated in the author's panel. Following a break for lunch, well known Laurel & Hardy memorabilia collector Gino Dercola presented a slide show featuring photos of hundreds of unusual collectibles.

That evening, convention goers boarded buses and traveled about an hour to Lake Winnipesaukee. There, we boarded the ship M.S. Mount Washington and departed for a sunset cruise upon Lake Winnipesaukee. The cruise included a dinner buffet and entertainment. On the main deck, Laurel & Hardy look a likes performed a dance from Way Out West, with additional performances of songs from Laurel & Hardy films. The program included a ventriloquist act and live music. The upper deck featured a separate hall playing rock music for those looking to dance. Many Sons also found themselves enjoying the nice weather on the outer decks.

Buses returned to the hotel right around midnight, just in time to open the Dealers' Room for "Midnight Madness," which is a longstanding tradition of opening the sales room for the first time at midnight.

The second day of the convention began much the same as the first day, with announcements by Chuck McCann. Before lunch delegates gathered to discuss general business of the Sons of the Desert in what is known as the Grand Council Meeting. The meeting was open to all convention goers and was presided over by Cliff Sawyer. No general business was presented for discussion, so the entire meeting was devoted to choosing the location for the 2014 International Convention.

The first presentation came from Bob Satterfield, past Grand Sheik of the Way Out West Tent and current Grand Sheik of the San Bernardino 45 Minutes from Hollywood Tent. As one of the co-chairs of the 1980 Convention in Hollywood, Bob has long wanted to bring the International Convention back to Los Angeles. His slideshow presentation included locations and grave tours, a tour of a working movie studio, and a banquet at the site of a Laurel & Hardy film.

The second presentation was given by Roger Robinson (on behalf of Chris Coffey) for a bid in England. In an unusual twist, Roger explained that he was making a bid but begged everyone in attendance to vote for the Hollywood bid. Just the same, Roger gave a nice video presentation and suggested that they would like to see their proposed convention take place in 2016.

Roger reiterated that he did not wish to receive any votes, so an informal vote was taken with Hollywood receiving a preponderance of the votes. The next convention is scheduled for July 2-6, 2014 in Hollywood, California.

After a break for lunch, everyone returned to the Ballroom for the Parade of Tents lead by Paul Bellefeuille (On the Loose Tent, New Hamshire). The official convention Laurel & Hardy look a likes helped start off the event. The parade was only from the back of the ballroom to the front, but most tents had fun marching the short distance with their tent banners held high. Each tent in attendance sent their representatives to the front of the room for a brief greeting. 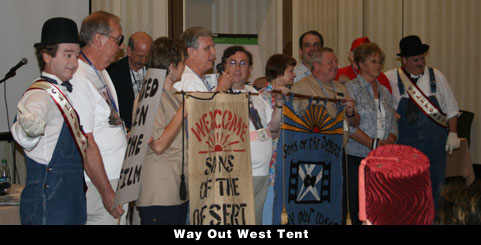 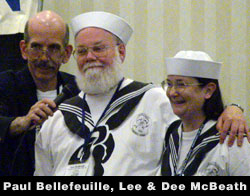 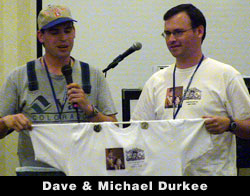 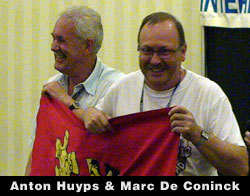 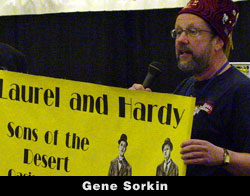 The traditional Trivia Contest took on its old format, with former quizmasters Scott MacGillavray and Dwain Smith conducting the contest. There were only four teams, which were reduced to two people each. The contest was a battle of New England, as all eight participants were chosen from nearby tents. Each round offered contestants a choice between questions of different values based on the difficulty of the question. The winning team was Kay Lhota (Brats Tent, Boston) and Lou Sabini (One Good Turn Tent, Connecticut). The late afternoon activity was a presentation by Dave Stevenson of Thelma Todd films.

Following dinner on your own, delegates marched to the nearby Palace Theater for a modern day variety show. The show opened with announcer Paul Bellefeuille music by The River Birds. Then comedian Emo Philips took the stage, along with performances by roots troubadour guitarist Samuel James and Rock 'n Roll ventriloquist Carla Rhodes. Laurel & Hardy's That's My Wife was screened with live accompaniment by Jeff Rapsis. Rebecca Kane finished the evening by singing Shine on Harvest Moon.

The final full day of the convention began with Chuck McCann's third and final orientation meeting. Before lunch, delegates were given a chance to tour the nearby Currier Museum of Art on their own. Back at the hotel, the traditional Putting Contest was hosted by Glenn and Tammi Campbell. The Pee-Wee Contest was conducted next to the putting contest, on the lawn in front of the hotel. The Pee-Wee contest was supervised by Roger Gillette, Elaine Johnson, Rita Crandall, Neil Lifson, and Patricia Gillespie. Below, Gary Cohen is pictured with Glenn Campbell and Bob Satterfield is pictured with Rick Lindner and Lori Jones McCaffery. 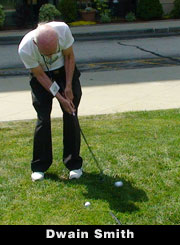 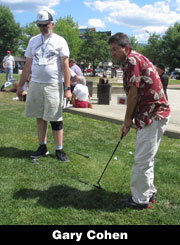 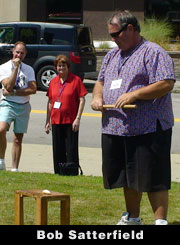 A two-and-a-half hour historian panel featuring Cole Johnson, Mark Johnson, Lou Sabini, Annette D'Agostino Lloyd, and Michael Agee took place back inside the hotel later that afternoon. The panel featured some interesting commentary about Harold Lloyd, but was mostly dominated by discussion of the challenges that have been faced in releasing L&H's material for the home viewing market, and what the future holds for additional releases.

The only banquet held in the host hotel took place Saturday night, with the program provided by past and present members of the New York Founding Tent. Ellen and Rich Kaplan (Bacon Grabbers Tent, Illinois) received first place for best costume, dressed as soldiers from Babes in Toyland. Following dinner, a raffle, toasts, and the Sons of the Desert Song, members of the Founding Tent provided music, comedy, and a marionette show featuring Howdy Doody (as operated by Jack Roth). Joining Howdy Doody on stage were his friends Phineas T. Bluster, Dilly Dally, and The Flub-A-Dub.

The thirteen delegates that have attended all eighteen international conventions gathered for their traditional photo. The thirteen are: 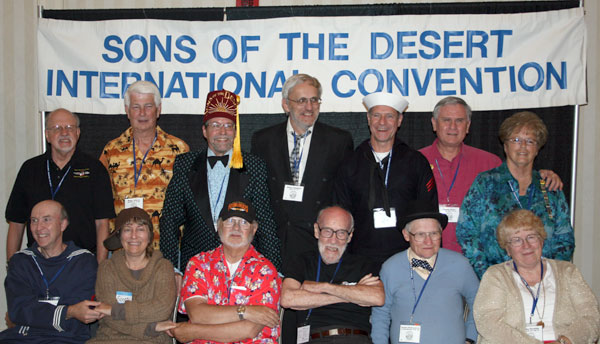 The event concluded with an auction of Laurel & Hardy memorabilia, with proceeds benefiting the UCLA Film and Television Archive's program to preserve the films of Laurel & Hardy. Marshall Korby (Dancing Cuckoos, Michigan) was the auctioneer.

The convention came to a quick close on Sunday morning. Following a breakfast buffet in the Grand Ballroom, Cliff Sawyer took the stage to make some final announcements. Peter van Rooij flew in from Indonesia, and received an award for being the person who traveled furthest to attend the convention. 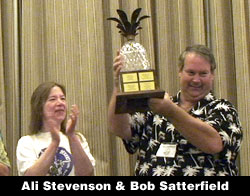 Then representatives from each of the 18 International Conventions lined up to pass the crystal pineapple down the line from convention to convention, eventually handing it to Bob Satterfield who will chair the 19th International Convention in two years. Cliff Sawyer returned to the stage to thank everyone who helped and to thank everyone for coming.

Thanks to Brad Farrell, David Rodriguez, Jimmy Wiley Jr., and Jim Wiley III in the preperation of this report.