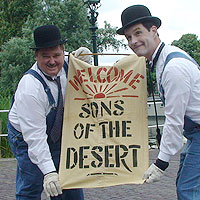 Before the start of the convention, two days of pure sightseeing excursions were offered to about one hundred delegates.

Activities on Monday began with a tour of the Batavia, a recently built replica of a 17th century merchant ship. Then it was off to Zaanse Schans for shopping, snacks, and visits to windmills. The day ended with a boat trip from Marken to Volendam.

On Tuesday, we took another boat from Rotterdam to Kinderdijk to see more windmills. Then we toured a Delftware factory, followed by a tour of the city of Delft. 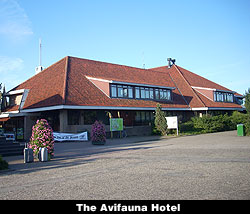 The convention took place about 25 miles out of Amsterdam, in the city of Alpen aan den Rijn. Unlike most previous conventions, delegates were divided between The Avifauna Hotel and the Golden Tulip Hotel. The Avifauna was situated on the grounds of a large bird park, and was the location of the convention banquets. A small dealer's room and film room were located in the basement of the Avifauna Hotel.

No formal activities were scheduled during Wednesday morning or afternoon, other than a guided tour of the Avifauna Bird Park. Convention delegates registered throughout the day, receiving their name badges, t-shirts, and goodie bags. 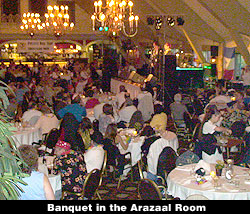 The convention officially began with the Wednesday night banquet in the Arazaal room of the Avifauna Hotel. Before the meal was served, the convention hosts said a few words to start the event. There were no toasts, as they were put on hold for the Saturday night banquet. Following dinner, the Fardouz Honolulu Dancers performed Honolulu Baby and several other Hawaiian type dances. They were followed by the Beatles tribute band, The WannaBeatles.

The traditional parade of tents was replaced by a random roll call of the tents represented at the convention. Unfortunately, due to poor sound in the banquet hall, most of the Way Out West Tent members never heard their tent's name called. But Lori Jones McCaffery did hear Way Out West through all the chaos, and took to the center of the room with our tent's Sons of the Desert banner. Afterwards, the Fardouz Honolulu Dancers and The WannaBeatles each performed a second time. 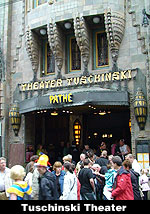 Six buses left for Downtown Amsterdam bright and early in the morning. First on the agenda was the recently restored Tuschinski Cinema, where we were given a history of the building by the theater's historian. A brief tour of the theater's public spaces followed. 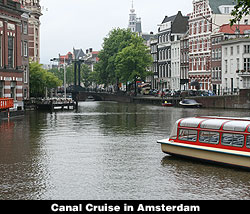 Delegates walked a short distance to board long and narrow canal boats for a scenic tour of the city, which towered above the narrow waterways. The sightseeing cruise included a glimpse of the Anne Frank home, the narrowest building in Amsterdam, and thousands of bicycles.

A late lunch was served at Restaurant d’Vijff Vlieghen (The Five Flies Restaurant). Despite any implications made by its name, this fine restaurant is well known locally as a good spot to sight celebrities. Following lunch, convention delegates were given four hours on their own in Amsterdam.

Shortly after the buses returned to the Avifauna Hotel, author A.J. Marriot gave a Powerpoint presentation featuring some 350 rare stills of Stan Laurel. The presentation continued past midnight. 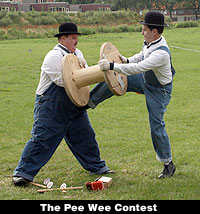 The bid for the 2010 convention was the main topic for the morning's Grand Council meeting. Sacramento's Another Fine Mess Tent was the only tent that announced an intention to bid. Roger Gordon and Dwain Smith presided over the meeting, but the video projector needed for the convention presentation was unavailable so the presentation was postponed until the evening banquet. Eric Woods gave an update on fundraising to place a statue of Laurel & Hardy in Stan's hometown of Ulverston. No other topics were discussed, and the meeting was promptly adjourned.

Just before 1pm, the conventioneers walked across the street from the Avifauna Hotel to board two boats bound for the city of Leiden. Lunch was served on board the boats, while Laurel & Hardy look-a-likes Bill Leavy and Jamie McKenna performed and celebrity guest Jean Darling signed her new book. At the town of Leiden, everyone disembarked for group photos with their other tent members. Below is the group photo of the Way Out West Tent, pictured (l-r): Jimmy Wiley Jr., Lori Jones McCaffery, Jim Wiley III, Cassidy Cook, Bob Duncan, Kris Wiley, Richard Bann, and David Rodriguez. 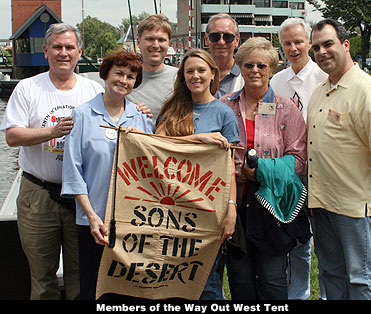 A short while later delegates took the boats back to the convention hotel, only to find a Model-T Ford car show set up in the parking lot. Laurel & Hardy look-a-likes performed in the vehicles for a large crowd.

The evening's banquet featured a buffet, with different stations for soup, salad, entree, and desert. Those who did not want to stand in the long line for entrees were able to start off at the dessert line with no waiting. After several more trips to the dessert line, the 2010 convention presentation was shown and received a unanimous vote from the delegates in attendance. 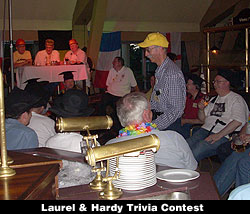 In a tradition that was started at the 1984 International Convention, the Friday evening banquet concluded with the trivia contest. Long-standing Quizmasters Henry Sorenson and John Duff were joined by Eric Woods and scorekeeper Janice Hawton to ask a mixture of obscenely difficult and blatantly obvious trivia questions. Many teams of three were formed to represent various nations in attendance. There were so many teams that it appeared more people were competing than observing. The winning team was from Scotland, and consisted of John Bogie, Dougie Brown, and Willie McIntyre.

Following the banquet, a screening of The Bohemian Girl was presented in an outdoor amphitheater next to the banquet hall. With the long summer days in The Netherlands, the sun had finally disappeared by 11 p.m. so that the screening could take place in total darkness. 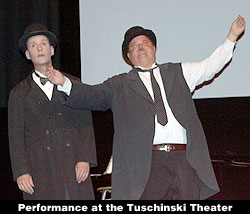 Delegates boarded buses in the morning for one final trip into the city of Amsterdam. We returned to the Tuschinski Theater (which we had toured on Thursday) for a complete film show. The program included an overture and live musical accompaniment of the film Liberty by "The Sprockets." The film program also included The theatrical trailer for The Rogue Song, the Mickey Mouse short Mickey's Polo Team. Laurel & Hardy look-a-likes Bill Leavy and Jamie McKenna took to the stage for a live performance. The program also included Laurel & Hardy in Perfect Day, and concluded with their feature film Sons of the Desert.

Following the show, delegates were offered free time on their own in Amsterdam or one of three optional tours. Most people chose to take a tour of the infamous Red Light District, while others opted for admission to Rembrandt's home or a demonstration of diamond cutting. Buses returned to the Avifauna Hotel in the late afternoon.

The final banquet was dubbed the "Fancy Dress Banquet," which turned out to be a costume banquet. The traditional toasts were given and the Sons of the Desert song was sung. Following dinner, awards were given to the winners of the Putting, Pee-Wee, and Trivia Contests. Jean Darling also judged the best costume.

Dwain Smith called the 13 people who have attended all 16 International Conventions to the stage to share a bottle of champagne and to take a group photo. Those pictured are: 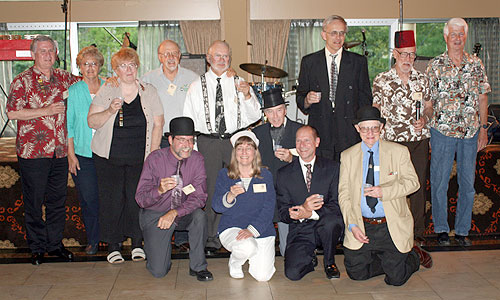 The traditional "passing of the pineapple" (which symbolizes the passing of the torch from the current convention host to the next, and which usually marks the end of the convention) was also part of the Saturday evening program. The Crystal Pineapple was passed down a line of those representing previous International Conventions to Irene Velasquez, who represented Sacramento's Another Fine Mess Tent. The band De Biet then took the stage, performing hits from the '60s. 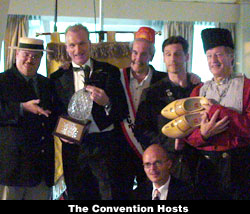 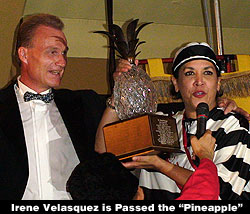 With all of the awards and closing ceremonies of the convention taking place the previous night, Sunday morning was simply a time to say goodbye to friends and fill up on one last meal before departing the hotel. Thanks to the Perfect Day Tent for all their efforts in hosting the convention.