Before the convention officially began, there were two optional pre-convention sightseeing excursions. On Monday, the "Darn Tootin Train Trip" took attendees by bus to Veteran's State Park in Georgia, where they boarded the Sam Shortline train to Americus, Georgia. In Americus, Laurel and Hardy films were shown at the Rylander Theater. The train then continued on for those in attendance to explore Plains, Georgia. After a long day, the train and bus retuned to the Marriott in Augusta. The "A Haunting We Will Go River Trip" to Savannah, Georgia, took place on Tuesday. The trip included sightseeing in the historic town and a river boat cruise. 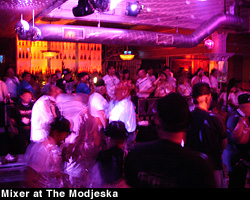 Throughout the day, convention delegates arrived at the Marriott Augusta Hotel and Suites. At the convention registration desk, attendees received their name badges, convention t-shirts, and "goodie bags" filled with items donated from various tents.

At 7:30 p.m., the convention officially began at a night club called The Modjeska, a short walk from the convention hotel. Many delegates looked puzzled as they entered the club, to find a dark club ablaze with red and blue lights bouncing off of a spinning disco ball; this was very different from the informal gathering of Sons in the convention lobby the night before previous conventions. Appetizers were served and the bar was open for a mixer for about three hours. About halfway into the evening, the lights came on and two pairs of Laurel and Hardy look a likes began the festivities by declaring the convention officially started. The mayor of Harlem, GA, greeted the conventioneers. Toasts were given to Stan, Babe, Fin, John McCabe, and Jean Darling. And the Sons of the Desert song was sung. A bit of dancing followed. Conventioneers found their way back to the hotel for the opening of the Dealer's Room at 10 p.m.

This morning's activities began with a short walk to the nearby Georgia Golf Hall of Fame and Botanical Gardens. Several classic cars of Laurel and Hardy vintage were lined up at the entrance to the gardens, and signs featuring various L&H film titles were placed throughout the gardens to mark the sites of the day's activities.

After a brief golf routine between two Laurel and Hardy look a likes, the Oliver Hardy Putting Contest took place. Participants had three shots in putting a golf ball into a nearby hole; many made one shot, but nobody made two, so a putt off between eleven finalists was necessary to determine the winner; as always, the winner was not officially announced until the Sunday brunch. The contest was open to all delegates who wished to participate. 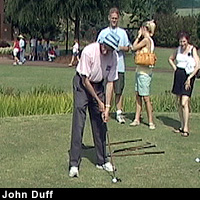 As the golf putt-off wrapped up, delegates moved to the other side of the lake for the Pee-Wee contest. This contest was also open to anyone who wished to play. Contestants took a shot at hitting three pee-wee's across the field for distance. The pee-wee is placed on a small riser and the contestant taps the wooden pee-wee in the air, then whacks it like a baseball once it is in the air. Most contestants are lucky to hit one of their three shots. In this contest the winner was obvious, but also not officially announced until the Sunday brunch. 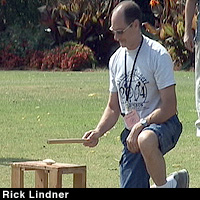 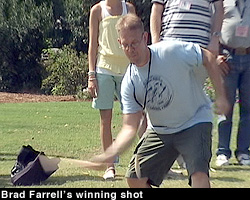 Following the morning's contests, a buffet lunch was served in a nearby tent next to the lake.

In the afternoon, a pie fight was staged by willing volunteers. Whipped cream was poured into paper plates to form the "pies," and the fight was contained within a large circle marked off by yellow tape; those inside the tape were fair game. Local media showed up for the fight, which lasted about five minutes. About 30 people participated in the pie fight, including Way Out West's own Lori McCaffrey and Bob Duncan. Although no prize was given for the pie fight, Bob Duncan used his height to his advantage and managed to get the last pie off of the pie rack for the final toss. 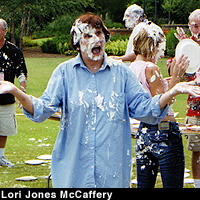 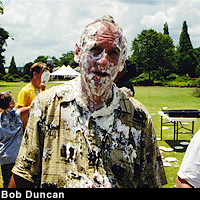 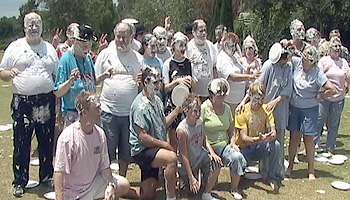 With the heat of the afternoon, it was time to return to the hotel for the Grand Council meeting. As there was no official business to discuss, the meeting was conducted only to determine the location for the next International Convention. Three tents made bids. The first was from the Another Fine Mess Tent of Sacramento, California. The second was from the Dancing Cuckoos Tent of Detroit, Michigan. The the final bid was from the Perfect Day Tent of Amsterdam, Holland. All three presentations were given by computer/video with questions taken afterwards. Ballots were passed out at the end and the vote was taken in secret. Three representatives counted the ballots afterwards. 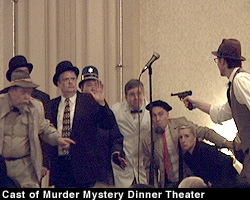 After a cocktail mixer, the doors to the hotel's grand ballroom opened for our first banquet. This was the Laurel and Hardy Murder Mystery Dinner Theater banquet, and as the delegates found their seats the performers from the murder mystery circulated throughout the room to set the stage for the performance. Before dinner was served, the characters were introduced on stage. The premise was that Ollie's uncle had been kidnapped, and the writer, producer, and performers of a radio drama were all suspects (in addition to the Boys). Following dinner, the radio drama was performed and Laurel and Hardy helped to solve the case. Afterwards, Bob Satterfield announced that the Perfect Day Tent (Oasis 13) had won the bid for the 2008 International Convention, to take place near Amsterdam. The film room and dealer's room were opened after dinner. 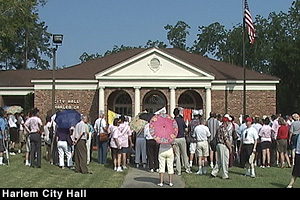 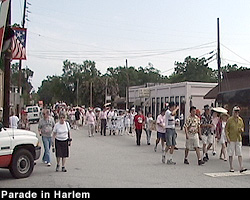 Today, the convention traveled to nearby Harlem, Georgia, to see the town in which Oliver Hardy was born. In front of the City Hall, delegates were addressed by town officials before a short march to the Museum of Laurel and Hardy. Inside the museum, fans looked at the various memorabilia and sat down for a moment to watch a film in the coolness of the theater. Outside in front of the museum, two members of the Sons of the Desert were married. A parade then marched along several city streets to a wedding reception at the nearby Woman's Club. Along the parade route, conventioneers stopped to get a photo of Ollie's Laundry, the site of the home where Oliver Hardy had lived.

Buses then took the delegates to the other side of town for lunch at the city's High School. After lunch, a surprise performance was given by students in the school's auditorium. The musical entitled "Take a Smile," was about the lives of Laurel and Hardy; their early years and their eventual teaming. 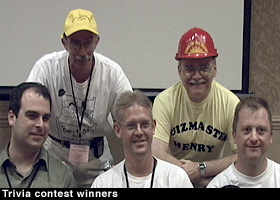 Returning to the hotel that afternoon, delegates made their way to the film room for the Trivia Contest. The quizmasters were John Duff and Henry Sorenson (pictured with winners). Eight rounds of questions were given to six teams of three. The questions were randomly drawn by one member of the team, and had to be answered within a brief time limit. Each question was worth one point. In the end, two teams were tied for first place. The final question asked the teams to name all of the Laurel and Hardy films which begin with the letter "T" (not including those which start with "the"). The winning team had 10, while the second place team had 7. The winning team consisted of David Rodriguez (Way Out West Tent), Brad Farrell (A-Haunting We Will Go Tent), and Peter van Rooij (Swiss Miss Tent). 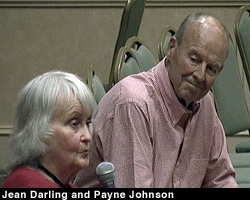 Immediately following the trivia contest, the Celebrity Panel took place. In attendance at the convention were Jean Darling (Curly Locks in Babes in Toyland) and Payne Johnson (one of the Three Little Pigs in Babes in Toyland). Both spoke about their acting careers and their memories of the Hal Roach Studios. Autographs were given following the questions and answers.

The evening's banquet had a Luau theme, and was emceed by Marshall Korby of the Dancing Cuckoos Tent. Marshall sang traditional Laurel and Hardy songs, including Honolulu Baby (featuring the Dancing Cuckoos Dancers in the background). Laurel and Hardy look a likes performed a funny magic routine. Ashleigh Farrell of the Dayton A-Haunting We Will Go Tent won the Harlem Scavenger Hunt earlier that day, and was awarded her prize. Dwain Smith presented the last ever Founder's Awards, which were approved by John McCabe before his death last year. The Founder's Award to a tent was given to the Boston Brats Tent, and accepted by Brat's member Bruce Church. The Founder's Award to an individual was given to Marcia Opal of the Chicago Bacon Grabbers Tent. The banquet concluded with a Parade of Tents, where all tents in attendance were represented by their members on stage for a brief greeting. Films and the dealer's room continued after dinner. 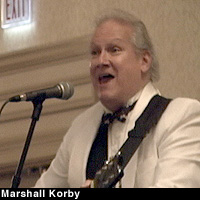 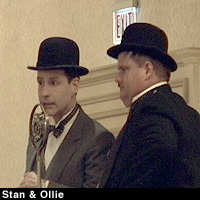 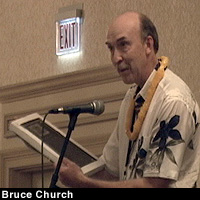 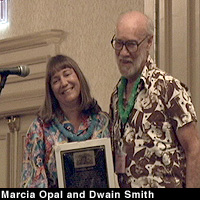 Buses left the hotel bright and early this morning, for a trip to Stone Mountain near Atlanta. Stone Mountain is a theme park, which includes live shows, a plantation, riverboat, miniature golf, and a huge carving of a Confederate Soldier in the side of the mountain. A train around the mountain carving and a skyway to the top of the mountain were some of the other activities included that day. This was an all-day event, with most delegates returning to the hotel around 7 p.m. Dinner that evening was on your own. The film room and dealer's room were open one last time that evening. 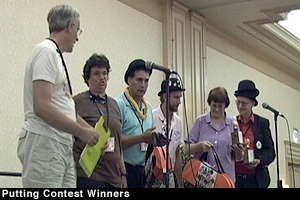 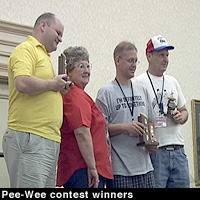 Glenn and Tammy Campbell presented the winners of the Oliver Hardy Putting Contest with their prizes. In third place was our own Lori Jones McCaffery; in second place was Flip Lauer of the Cleveland Big Business Tent; in first place was Donald Hickox. Stephen Wichrowski of the Massachusetts Air Raid Wardens Tent was awarded with the Horrible Mention Award.

Next up were the winners of the Pee-Wee Contest. Presented by Elaine Johnson and Roger Gillette, the third place winner was Anthony Quarterman of London's Live Ghost Tent. In second place was Douglas Pike of the Harlem Berth Marks Tent. First place winner was Brad Farrell of Dayton's A-Haunting We Will Go Tent. All three winners received a trophy; Brad was also awarded the winner's plaque, on which his name will be engraved.

Dwain Smith then took the stage and called the thirteen final attendees of all 15 International Conventions to the stage. In what is a new tradition, they shared a bottle of champagne as their photos were taken. They are: 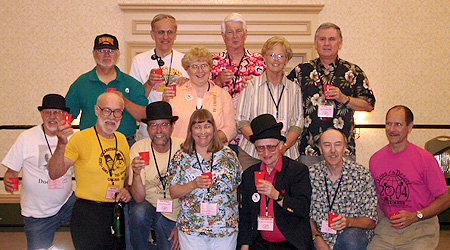 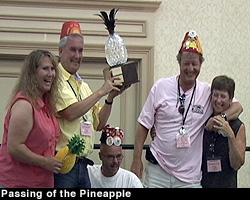