This page contains frequently asked questions (and their answers) about Laurel & Hardy, the Sons of the Desert, and the Way Out West Tent. If your question is not answered here, you may contact us by e-mail.

Who were Laurel & Hardy? 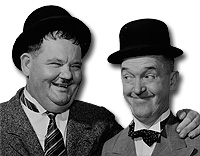 Stan Laurel and Oliver Hardy were comedians who found fame after being teamed together in short films at the Hal Roach Studios during Hollywood's silent era (circa 1927). Known as "Laurel & Hardy," the team's popularity continued to grow with the advent of sound films. Eventually, they became stars of their own feature films. There were a total of 106 films in which Laurel and Hardy both appear. Stan Laurel was born Arthur Stanley Jefferson in Ulverston, England, on June 16, 1890. He died February 23, 1965, in Santa Monica, California. Oliver Norvell Hardy was born January 18, 1892, in Harlem, Georgia. On screen he was often referred to as "Ollie," but his real nickname was "Babe." He died August 7, 1957, in North Hollywood, California. For more information, we recommend you pick up a copy of one of the many books on the subject.

What was the name of the film where they...?

We maintain a complete listing of all of Laurel and Hardy's work, including a photo from and a synopsis of each film. Please look here first, if you are trying to figure out the name of a particular film. This listing also indicates if the film is available for sale.

Click here for descriptions of Laurel and Hardy films.

Where can I get a list of all their films?

For descriptions of each film, please see the previous question. If you just want a simple list of all 106 film titles to download and print, click on the link below. You will download an Adobe PDF document that can be opened and printed on your computer (Adobe Acrobat required)

What is the Sons of the Desert?

The Sons of the Desert is an international fraternal organization devoted to memory of the persons and films of Stan Laurel and Oliver Hardy. The organization is named for the Laurel and Hardy film of the same name. It was founded in 1964 in New York City, by Orson Bean, Al Kilgore, John McCabe, Chuck McCann, and John Municino. Since then, many local chapters have been founded around the world. These chapters are known as "tents" and are named after a Laurel and Hardy film. Each tent also receives an oasis number, which corresponds to the order in which they are admitted to the organization.

What is the Way Out West Tent?

What does our tent do?

The Way Out West tent meets about every other month, and has a yearly special event. The special event may be a bus tours of the L&H film locations around Los Angeles, which includes a walk up the Music Box stairs, a first hand look at the Big Business house, as well as a visit to the grave sites of Stan Laurel and Oliver Hardy. Or it may just be a special theme meeting or banquet. We have also taken part in such things as a Laurel and Hardy scholarship fund for promising comedians, helping erect a commemorative plaque at Ollie's grave, and creating a small park named for Hal Roach at the site of the studio, in Culver City. Part of our membership dues also provide flowers to the graves of the boys and other celebrities who are no longer with us.

Because of our proximity to the stars, many past meetings often included celebrity guests who worked with the boys on screen or behind the scenes. Because most of them are no longer with us, we also honor many of the spouses, children, and grandchildren of those celebrities who have passed away. Meetings typically consist of a none-too-serious business meeting, guest speakers, and maybe even a door prize raffle. And, of course, no meeting would be complete without the films. Laurel & Hardy are always the focus of our film program. On occasion we may also show a Charley Chase, Our Gang, or other comedy from the Hal Roach Studios, when it is relevant to the program. We always have a no-host bar and hot dogs on sale.

For many years, our annual banquet was the high point of our year. Due to the rising cost of holding these events, we no longer have banquets annually. In the past they were formal events, held in the month of October. We honored Hal Roach, T. Marvin Hatley, Anita Garvin, Billy Gilbert, Mantan Moreland, Darla Hood, Ray Bradbury, and many others. Stan's daughter, Lois Laurel Hawes, frequently attended banquets. Both Stan and Babe's widows also attended banquets, before their deaths. We have had hundreds of celebrity members in attendance, over the years; click here for a complete list.

When is our next meeting?

Our current meeting schedule can always be found on the Membership page.

Where do we meet?

We normally meet at the Mayflower Club, located at 11110 Victory Boulevard (west of Vineland Avenue), in North Hollywood, California. At the Mayflower Club, we always have a no-host bar and hot dogs on sale. Occasionally we meet someplace else, so be sure to check our current newsletter for information on our next meeting.

Click here for a map to the Mayflower Club.

How do I join?

The easiest way to join is to come to our next meeting. You can join at the door. There are no special membership requirements; anyone may join.

I don't live in Los Angeles. Where's the tent closest to me?

There are over 100 active tents worldwide. Every tent is independently operated, so you will have to contact them for more about their dues, rules, and meeting schedules.

Click here to view our online database of Sons of the Desert Tents.

What if there is no tent near me?

There are many people who do not have a tent nearby, but wish to be a member of the Sons of the Desert. The Utopia tent is reserved for such "delegates at large," who are unable to attend club meetings. There are currently about 200 Utopia members. You can apply for membership by paying dues of $20 (USA), £14 (UK), €18 (Europe). You will receive a one-year membership in the Utopia tent, a one-year subscription to the Intra-Tent Journal, and be listed in the listed in the world-wide Utopian Log. Utopia membership is strictly reserved for individuals who cannot otherwise join a local tent. To join, please contact:

When is the next international convention?

The 21st International Convention will be held in July 2018 in Cincinnati, Ohio. The convention is being hosted by The Chimp Tent (Oasis 279). Visit their web site at: www.laurelandhardy2018.com

Where were our past conventions?

The Way Out West tent hosted the Sons of the Desert 2nd International Convention in the summer of 1980. This convention was known as Hollywood '80. The highlights of the convention were the numerous L&H celebrity guests. But maybe more importantly was the effort made by several of our members to locate many of the film locations. The convention offered a bus tour of these sites, including a walk up the Music Box stairs and a first hand look at the house from Big Business. Since then some additional sites have been found, while others have been lost to "progress" (like parking lots and apartment buildings). Another one of the highlights of this convention was the restaging of the pie fight from Battle of the Century. For a complete recount of this convention, see the excerpt from Pratfall.

What is the Brushwood Gulch Gazette?

This is the name of our newsletter. Brushwood Gulch is the name of the western town in which Way Out West was set.To receive the printed version in the mail, you must be a dues paying member.

Click here to read the online version of our most recent newsletter.

What is the Intra-Tent Journal?

The INTRA-TENT JOURNAL, or ITJ for short, is the official publication of the Sons of the Desert. It is published four times a year and is a great way to find out what other member of the Sons are doing all around the world.

Pratfall was a publication produced by the Way Out West Tent between 1968-1985. There were 17 regular issues published during that time, plus the quadruple-length final issue. Back issues are no longer available on this web site, at the request of one of our members.

Where can I buy Laurel & Hardy videos?

We maintain a complete listing of Laurel and Hardy video cassettes, laser discs, and DVDs in our video database. Our listings includes new videos which are currently available, as well as those that were distributed in the past. This should be helpful if you are looking for used tapes or don't want to order online. Movies Unlimited and Amazon.com both sell videos in the NTSC standard, used in North America. If you live in a part of the world where the PAL standard is used, we recommend looking at Amazon.co.uk to purchase videos online. Both retailers sell VHS cassettes as well as DVDs.

Where can I buy Laurel & Hardy books?

New releases can usually be found at your local bookstore. Our books page contains the names of just about every L&H book we've ever seen, along with their ISBN number (which is useful if you want to special order a book from your favorite bookstore). If you wish to order online, we have provided links to relevant books available from Amazon.com in the United States and Amazon.co.uk in the United Kingdom.

How do I send a virtual greeting card?

Virtual greeting cards are special webpages which you can use to send a message to anyone with e-mail. Our cards include one of several color photos of the boys, room for your personal message, as well as other options that you may use to personalize each card. The card itself is NOT e-mailed to the recipient; rather, a message is sent to that person telling them where to visit in order to view (and optionally print) the card. The process is entirely free and may be used as many times as you wish.