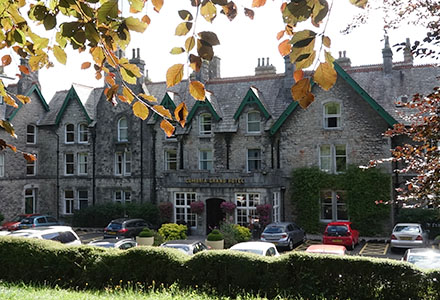 Delegates registered for the convention throughout the afternoon as they arrived in the lobby. In the hotel banquet room, Ian Parker welcomed delegates on behalf of convention chairperson Chris Coffey, then John Ullah (chairperson of the 1998 Birmingham International Convention) using a wireless microphone introduced various conventioneers from each table. A buffet dinner followed. Afterwards, John called people to the front of the room to give the traditional Sons of the Desert toasts and to sing the Sons of the Desert Song.

The Dealer's Room operated out of a small room in the lower level of the Cumbria Grand. Laurel & Hardy look-a-likes Tony Carpenter (as Stan) and Phil Hutchinson (as Ollie) performed in a "Lucky Dog Theater" production, located down the hall from the Dealer's Room in the hotel's Victorian Ballroom. Socializing continued afterwards, in and around the hotel's two bars.

Each morning, a buffet featuring a full English Breakfast was provided at the hotel in the main banquet room.

Buses departed the Cumbria Grand this morning around 9:30 for a short trip to the Lakeside & Haverthwaite Railway, where delegates boarded an authentic steam powered train for a twenty minute trip through the beautiful countryside of England's Lake District. At the end of the line, everyone disembarked the train and set off aboard the Swan for a forty minute cruise upon Lake Windermere. It was a warm and sunny day, unlike the cold and windy day delegates took this same voyage in 1984. 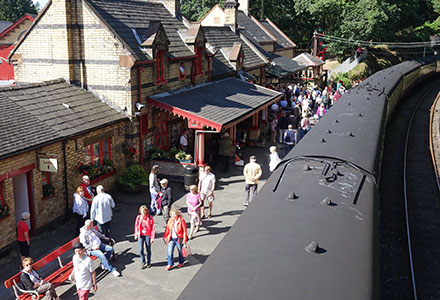 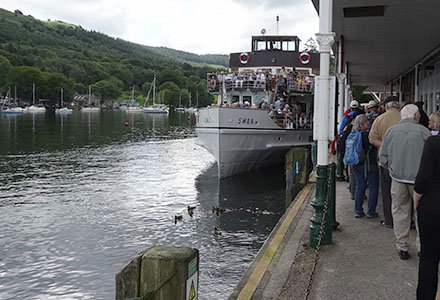 At the end of the cruise, delegates were on their own in the city of Bowness-on-Windermere. This quaint village set on the shores of Lake Windermere featured numerous shops, pubs, and restaurants that everyone had the afternoon to explore. The town features The World of Beatrix Potter exhibit and gift shop, which was visited by many. At 5:30 p.m., buses returned everyone to the Cumbria Grand Hotel.

The main banquet room of the Cumbria Grand Hotel was once again the site of our buffet dinner. Ian Parker called out tables to take their place in the buffet line. After dinner, John Ullah brought delegates to the microphone to give the traditional Sons of the Desert toasts, and then the Sons of the Desert Song was sung.

Following dinner, everyone were invited to change into their costumes for the "Fancy Dress" party. Some delegates took the stage of the ballroom to introduces themselves and their costumes. Afterwards, Tony Carpenter and Phil Hutchinson returned to the Lucky Dog Theater to recreate some of Laurel & Hardy's radio and live performances. The evening concluded with music and dancing late into the evening.

Following the beautiful weather on Thursday, delegates awoke to gray skies and a light rain on Friday morning. Fortunately most of the day's activities were scheduled to be indoors at the hotel. The only exception was the Pee Wee Competition, scheduled for 9:30 a.m. on the lawn adjacent to the hotel. This was the site of the very first International Convention Pee Wee Contest in 1984. Despite the weather, the rain was very light and did not deter 26 delegates from stepping outside to participate in the competition. While there were some good hits, the Pee Wee was not flying as far as it had at previous conventions.

At the same time as the Pee Wee contest, indoor games were taking place nearby in the hotel ballroom. There were four different contests to compete in: the Flying Deuces ring toss, a stick the tail on Dinah the Mule game, a Block-Heads can knock down game, and the Oliver Hardy Putting Contest.

At 11:30, Bill Oates made a brief announcement about the Intra-Tent Journal, of which he is the new editor. The Journal will now be published in both America and Europe to speed the distribution of the publication and to save on the cost of postage. Immediately following, five teams of three gathered for the trivia quiz. Eric Woods served as the quizmaster and Janice Hawton as the score keeper. The contest featured multiple rounds where the contestants received a random question based on the number they chose. A lunch buffet followed at 1:00 p.m. in the upstairs banquet room. 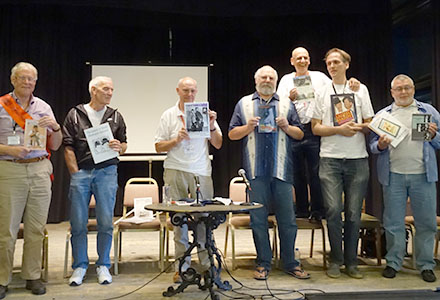 At 2:30, seven of the nine authors in attendance at the convention participated in a brief panel where they introduced their book(s) and took questions from the audience. Those participating in the panel were Willie McIntyre, Tony Bagley, Roger Robinson, Bill Cassara, John Ullah, Harry Hoppe, and Irv Hyatt (Pictured left to right).

Following at 3:00 was the convention bid for the 2018 International Convention. There was only one bid, made by The Chimp Tent of Cincinnati, Ohio. Although The Chimp Tent's Grand Sheik Gene Sorkin was unavailable to make the bid, a video was presented by Rick Lindner (chairperson of the 2004 Columbus International Convention), Karin Thikkurissy, and Robert Thikkurissy. The vote was unanimous in favor of Cincinnati.

An audio-visual trivia contest took place around 3:30, with contestants identifying sounds from films and completing dialog after hearing portions of scenes. Points were given based on the completeness and accuracy of the answer. The contest was brief, but very entertaining. 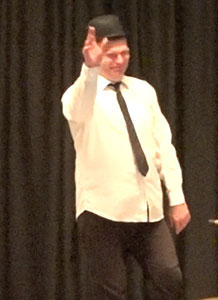 The next event was the one man show The Fiddle and the Bow, performed by Andrew Craig Shepherd (pictured). Starting off the night Stan Laurel received his Oscar in absentia, the performance looked back over the lives and careers of both Laurel and Hardy.

At 7:00 p.m., a buffet dinner took place once again in the hotel banquet room. As was the case the previous nights, Ian Parker drew numbers to call tables to the buffet line and John Ullah asked five conventioneers to deliver the traditional toasts. The Sons of the Desert song followed. Pat Finney then drew tickets for the evening's raffle, with proceeds benefiting nearby St. Mary's Hospice.

The 12 people that have attended all 20 conventions had not changed since the previous convention. They are:

Following the events in the hotel restaurant, delegates moved downstairs to the banquet hall to watch delegates take the stage to provide entertainment for the evening. Afterwards, music and dancing took place.

Following breakfast, delegates boarded buses around 10:30 for a short drive to the town of Ulverston, which is the city where Stan Laurel was born in 1890. In front of the Ulverston Coronation Hall, delegates disembarked from the motor coaches at the location of a life-sized statue of Laurel & Hardy. Sculpted by Graham Ibbeson and unveiled in 2009, the statue was paid for by donations and numerous fundraisers made on behalf of the Sons of the Desert.

At that point everyone was divided into two groups, with some delegates visiting the Laurel & Hardy Museum while others took a walking tour of Ulverston. Lunch was provided at the museum, and Laurel & Hardy films were shown throughout the afternoon. After lunch, the two groups switched places and everyone was able to see what they missed earlier in the day.

At the Laurel & Hardy Museum, delegates screened a documentary by Gary Winstanley about museum founder and local personality Bill Cubin. Those who attended the 1984 convention remember the late Bill Cubin fondly, and those who didn't found out more about the man who opened the first Laurel & Hardy Museum and spearheaded the drive to erect a statue to The Boys in Ulverston. Bill's wife Lucy Cubin, daughter Marion Grave, and grandson Mark Greenhow were in attendance. Following the documentary, everyone browsed the exhibits and memorabilia on display.

The walking tour guided delegates past many places that Stan Laurel knew well as a child. This included the nearby taffy shop where little Arthur Stanley Jefferson went to buy sweets and the site of the church hall where he attended Sunday School. Along the way the tour passed the Stan Laurel Inn pub.

The tour then came upon 3 Argyle Street. This is the home of Stan Laurel's grandparents, and the place where Stan was born. The owner of the home came out for pictures with a plaque which marks the site as Stan's birthplace. A replica of this plaque is affixed to the outside of the building and commemorates the site. 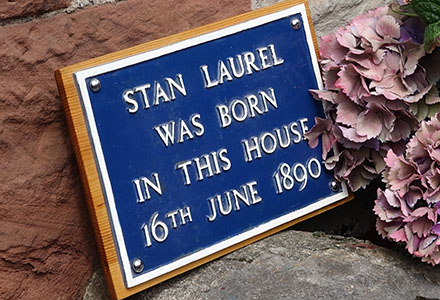 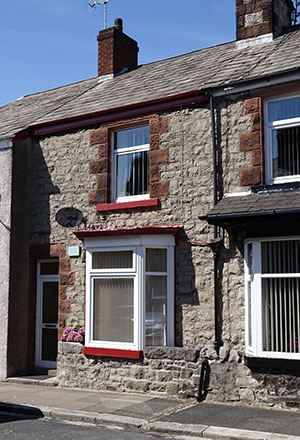 After many photos were taken, the tour continued up the block, to the nearby house owned by Stan's parents. The tour concluded at the Ulverston Brewing Company, featuring Laurel & Hardy themed beers.

At 7:00 p.m., delegates were served dinner in the Coronation Hall. Stan Laurel & Oliver Hardy appeared from the balcony of Coronation Hall in May 1947 when they visited Ulverston as part of their British stage tour. 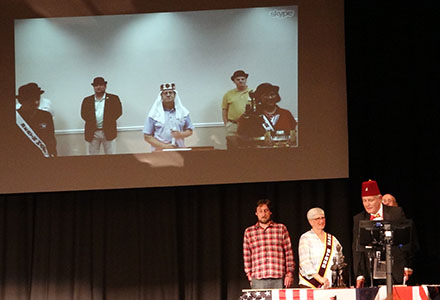 Ian Parker, the emcee for the evening, then announced it was time for the "twinning" between the birthplaces of Stan Laurel and OIiver Hardy. The town crier invited the Mayor of Ulverston, Counselor Mark Wilson, to the stage. He was joined by Laurel & Hardy Museum curator Mark Greenhow and his son. Linda Caldwell from the Berth Marks Tent of Harlem Georgia was also on stage, to represent Oliver Hardy's birthplace. Shortly after 9:00 p.m., a video link was established with the Mayor of Harlem, Georgia. Statements were read by mayors of each town. Linda Caldwell presented the Mayor of Ulverston with the Key to the City of Harlem. Printed proclamations were presented by Mayor Wilson to Linda and Mark. 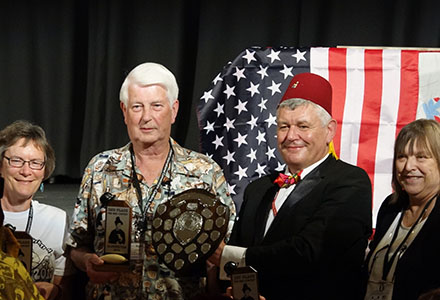 Eric Woods took the stage to give out various awards to those in attendance. The Sons of the Desert song was sung by 10 of the 12 delegates who had attended all 20 International Conventions. The missing two were stuck at the Cumbria Grand due to car trouble.

Actor Jeffrey Holland (well known for the British sitcom Hi-de-Hi!) then performed his one man tribute to Laurel & Hardy. The setting was a fictional visit by Stan Laurel to the home of Oliver Hardy shortly before his death. Stan holds a one sided conversation with Babe, who can't speak after his recent stroke. At moments, there are flashbacks to scenes from films, where Holland performs the roles of both Stan and Ollie (with a spot-on imitation of Hardy's Southern accent). The performance brought the evening's festivities to an end. 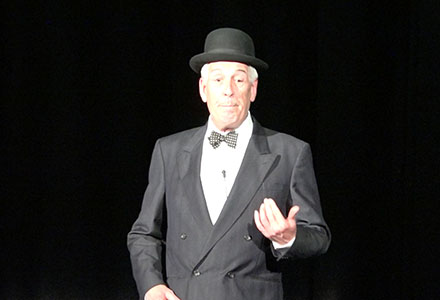 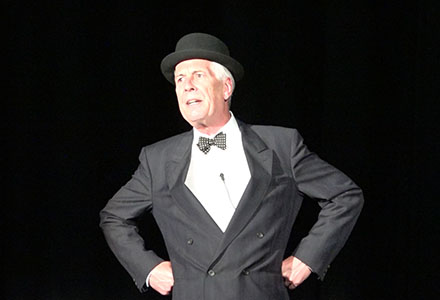 After the performance, the conventioneers returned to the buses for the half-hour drive back to the Cumbria Grand Hotel.

With breakfast included by the hotel, there was no Going Bye-Bye banquet. Those in attendance said their goodbyes at breakfast time, with many leaving before the 10:00 a.m. Grand Council meeting.

Special thanks to convention chair Chris Coffey, who was conspicuously absent from the limelight but always followed events closely. Thanks to the others who planned the events, handled registration, and made the convention run very smoothly including Mandy Finney, Pat Finney, Anton Huyps, Ian Parker, Roger Robinson, Cliff Sawyer, John Ullah, and Eric Woods.