On Monday and Tuesday, the Another Fine Mess Tent arranged two pre-convention tours for delegates that wanted to see a little bit more of the Sacramento area while on vacation. The tour on Monday visited several wineries in the Napa Valley area. On Tuesday, the tour visited a historic gold mine in the foothills of the Sierra Nevada Mountains. 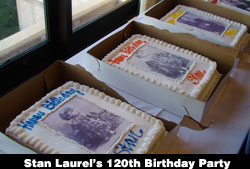 The Holiday Inn Capitol Plaza was conveniently located in downtown Sacramento, between an outdoor shopping mall and Old Sacramento (an old west style town filled with restaurants and shops). Most delegates arrived at the hotel on Wednesday. Registration was open most of the afternoon for Sons of the Desert to check in and receive their name badge, t-shirt, and foreign legion style Sons of the Desert hat. 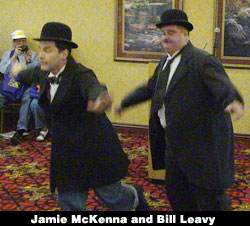 The main banquet room, film room, and dealer's room were located on the ground floor of the high-rise hotel. But on Wednesday night we gathered on the 16th floor in a large, windowed room overlooking downtown Sacramento. Upon entering the room, a label was placed on everyone's back with the name of a person or character related to the films of Laurel & Hardy. The goal was to guess the name of the person on your label by asking only yes or no questions of the other delegates. Old friends had a chance to catch up with each other and new friends were made.

This convention took place a month earlier than previous conventions, affording us cooler than average weather and the chance to gather on Stan Laurel's actual birthday. Traditional Sons of the Desert toasts were given and a half-dozen birthday cakes adorned with childhood photos of Stan were served. Laurel & Hardy look-a-likes Bill Leavy and Jamie McKenna performed a perfectly choreographed dance to "At the Ball, That's All" from Way Out West to conclude the party. Afterwards, the downstairs film room opened for several hours. 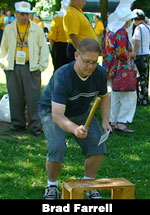 Buses departed the hotel early Thursday morning, and headed for the state park at Sutter's Fort. On the lawn outside the fort, conventioneers gathered to participate in two long-standing traditions: the Oliver Hardy Putting Contest and the Pee-Wee Contest. The putting contest was conducted by Glenn and Tammi Campbell (Blotto Tent, NJ), and afforded contestants three putts to get a golf ball closest to a marker on the lawn. As seen in the film Babes in Toyland (March of the Wooden Soldiers), the Pee-Wee Contest involves hitting a small, round piece of wood that is tapered at both ends with a stick. When hitting one of the tapered ends, it will fly up into the air so you can hit the pee-wee like a baseball. Participants have three chances to hit the pee-wee in this challenging contest, which was officiated by Roger Gillette and Elaine Johnson (Block-Heads Tent, MN).

Following the contests, delegates entered Sutter's Fort, which bears a resemblance to Fort Arid from Beau Hunks. Volunteers offered demonstrations and a self-guided tour was available of the 1846-era trading post and military fortress. Buses returned to the hotel in time for lunch.

Delegates found their way to the steps of the California State Capitol Building, where we met on the front step for a group photo. A small, informal parade left the capitol grounds for the Crest Theatre, located several blocks away. At the theater, we screened One Good Turn and Our Relations. Bill Leavy and Jamie McKenna also performed a very funny magic act as Laurel & Hardy.

Back at the hotel, Bob Satterfield (Way Out West Tent, CA) conducted the Grand Council meeting. Roger Gordon gave a brief update on the status of the Intra Tent Journal. The only other business to discuss was the location for the next international convention. The On the Loose Tent of Manchester, New Hampshire made the only bid for July 2012. Carol and Steve Rugh (One Good Turn Tent, CT) presented a video on behalf of Dave and Ali Stevenson. Following the video a vote was called for and the bid won unanimously. Click here to see the video presetation on YouTube.

The evening ended with the opening of the convention's dealer's room, where vendors sold various books, photos, t-shirts, fezzes, and other memorabilia pertaining to the world of Laurel & Hardy. Next door, the film room re-opened for several hours.

Friday morning offered some free time for delegates. Official activities began with the "Bullfighters" Fiesta Luncheon, accompanied by mariachis and a caricature artist. 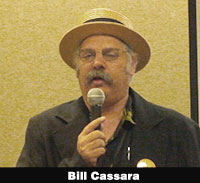 After lunch, Bill Cassara presented some rare Edgar Kennedy films in the film room. Bill is the author of "Edgar Kennedy: Master of the Slow Burn" and is an expert on all things related to this prolific actor. Bill spoke a little and answered a few questions. 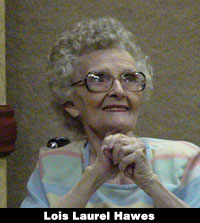 The celebrity meet and greet session scheduled for that afternoon began on a sad note. Longtime Sons of the Desert celebrity member Dorothy de Borba was scheduled to attend the convention, but unfortunately she passed away only two weeks before the event. Dorothy had attended 11 International Conventions (more than any other celebrity guest), and this was to be her first convention since 2002. Many of us were looking forward to seeing Dorothy, and she had said she was looking forward to seeing all of her old friends. Two video tributes to Dorothy were presented at the celebrity session, one by Jim Wiley III and the other by Bob Brauer (both of the Way Out West Tent).

Lois Laurel Hawes was then introduced for a question and answer session about her father. This was the first International Convention that Lois has attended since 1996, and it was clear that everyone in attendance was happy to have her and her family with us once again. 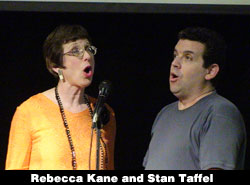 The film room opened again that afternoon, and delegates were given time for dinner on their own. Following the dinner break, buses took the conventioneers to the nearby California Automobile Museum. After touring the vintage cars, we were directed to a theater for a performance by Dave Moreno of music from Laurel & Hardy films on the Wurlitzer Organ. Convention host Rebecca Kane and our own Stan Taffel performed a duet along side Laurel & Hardy look-a-likes. Then we screened Angora Love and Two Tars with live accompaniment on the Wurlitzer.

Back at the hotel, the dealer's room and film room reopened. 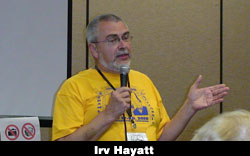 Saturday morning's Grand Council meeting was canceled, as there was no additional business to discuss. The first event of the day was a presentation by Irv Hayatt on the Hollywood Victory Caravan featuring rare newsreel footage, home movies, photos, and interviews relating to the World War II celebrity tour. 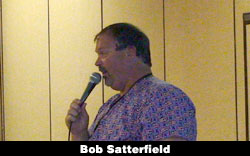 After lunch, Henry Sorenson (Going Bye-Bye! Tent, FL) and John Duff (Early To Bed Tent, CA) officiated the trivia contest. Mary May Vereen was the scorekeeper. There were six teams of three competing in eleven rounds of questions. The final round came down to a tie between two teams.

Next up was former Way Out West Grand Sheik Bob Satterfield to discuss our tent's legacy of celebrity members. His slide show presented photos of these celebrities at our meetings and banquets, as well as many of their grave sites. Bob discussed how these celebrities were located and how they participated in tent activities over the years.

Buses took us to the Aerospace Museum of California for our Saturday evening banquet. The "Hollywood Victory Caravan Banquet" had a World War II theme, including a vintage orchestra playing songs from that era. Delegates were allowed to tour some of the aircraft located on the grounds of the museum prior to dinner. 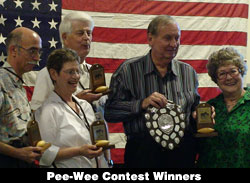 Following our buffet dinner, awards were given for the two Thursday morning contests. In golf, Bob Zeroun (Midnight Patrol Tent, CA) placed third, our own Stan Taffel came in second, and Mary Garfield (Bacon Grabbers Tent, IL) was the winner. Early to Bed Tent (and longtime Way Out West members) Janet and John Duff both received Pee-Wee awards, with Janet placing first place for women and John coming in third place overall. Second place went to Roger Gillette (Block-Heads Tent, MN) and first place was none other than Way Out West Vice-Sheik Bob Duncan. Bob is the second Way Out West member to win the coveted Pee-Wee Contest (Ken Runyan was the winner in 2000).

Next, the 13 remaining Sons of the Desert who have attended all 17 conventions returned this year for a photo and a glass of champagne. Those pictured are:

Awards were also given for the top three teams in the trivia contest. The winning team, named "The Sanford Arms," was the same team of three that won in 2006. Those pictured are: 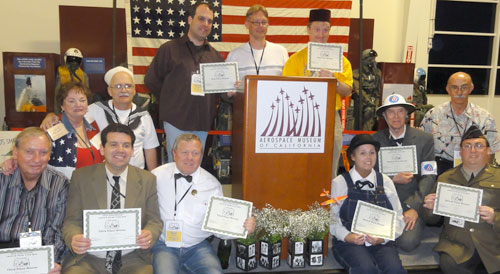 The orchestra played for a while, then during their intermission we were able to see a few moments of a new German documentary on Laurel & Hardy. Portions were shot during the 2008 convention in Amsterdam, but the centerpiece of the documentary was a brief home movie of Stan Laurel in his Santa Monica apartment only weeks before he passed away. Producer Tyler St. Mark acquired this film, which is assumed to be the last footage of Stan Laurel. Lois Laurel Hawes (who is featured in the documentary) was on hand with her family for the first public screening of this film. Also in attendance was Phyllis Coates (who was the first Lois Lane on TV's Adventures of Superman series).

Following the film screening, the orchestra returned and some people took to the dance floor. Laurel & Hardy look-a-likes Jamie McKenna and Bill Leavy took photos with the guests as the big, final night of the convention began to wind down. Back at the hotel, the film room and dealer's room were open one last time.

The convention came to an end on Sunday morning, with a breakfast buffet and the presentation of a hand full of awards to those who helped put the convention together. The "Passing of the Pineapple" marks the end of each convention, and as has become the tradition a representative from each previous convention took to the stage as the crystal pineapple is passed from one tent to another. At the end of the line, the pineapple was passed from Rebecca Kane to Carol and Steve Rugh as representatives of the 2012 convention headed for Manchester, New Hampshire. And with that, the convention came to an end. Friends said goodbye and gradually left the banquet room as they headed their separate ways.