Before the convention officially began, there were four different pre-convention sightseeing excursions. 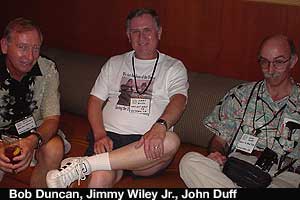 There were two separate outings on Monday, July 12. One group visited the Wright-Patterson Air Force Museum in Dayton, Ohio. This trip included a special tour of the Library of Congress film archives, also located on the Air Force base. Thanks to George Willeman (A-Haunting We Will Go Tent, Dayton, OH) for this private tour. At the same time, a separate group toured the Rock and Roll Hall of Fame in Cleveland, followed by a short trip to Canton for a tour of the Pro Football Hall of Fame.

With all of the pre-convention activities completed, the 2004 International Convention officially began with a 7 p.m. mixer at the Hyatt on Capital Square, home base for the convention. Long time friends were reunited and new friends were made during the mixer, which concluded at 9:02 p.m. with the opening of the Dealer's Room. Soon afterwards the film room opened, and the convention was underway. 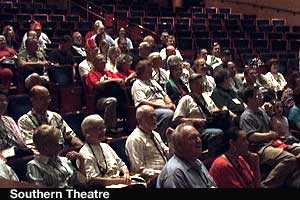 This morning's activities included a tour of two local "movie palaces." With the convention delegates split into two groups, tours of the Southern Theatre and the Palace Theater were conduced between 9 a.m. and noon. The newly restored Southern Theater originally opened in 1896 and was one of the first buildings in Columbus to be lit with electricity. The much larger Palace Theater was built in 1926 as both a movie theater and a vaudeville house. Delegates were able to tour the Palace Theater back stage. 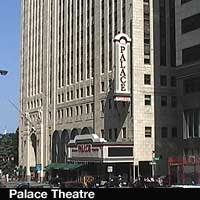 The Grand Council Meeting was held at 2 p.m. Bob Satterfield (Way Out West Tent, Los Angeles, CA) presided over the meeting. With no other business matters to discuss, the meeting was held in order to make presentations for the next International Convention. There were two bids. The first came from Rob Birarelli of the Leave 'Em Laughing Tent of Bridgeport, Connecticut (Oasis 211). The second bid was made by Denise Carter (with assistance from Linda Caldwell) of the Bert Marks Tent of Harlem, Georgia (Oasis 238). Both presentations were given via computer slideshow, with the presenters describing the various proposed events to the audience. After each presentation, questions were answered and a vote was taken by secret ballot.

At 4 p.m. the Pee Wee Contest took place on the lawn of the Ohio Statehouse, just across the street from the Hyatt Hotel. As always, the contest was officiated by Roger Gillette (Block-Heads Tent, Minneapolis, MN). Dozens of convention delegates participated in this long running convention tradition, based on the game Stan Laurel plays in Babes in Toyland. Each contestant was given three attempts to tap the pee wee into the air with a stick, and then hit it as far as possible once it is in the air. The game is very unpredictable, and few contestants are able to hit the peewee more than once. 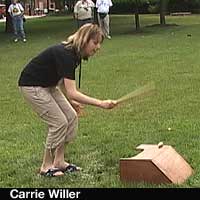 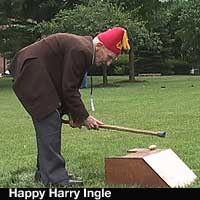 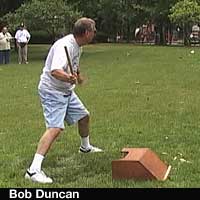 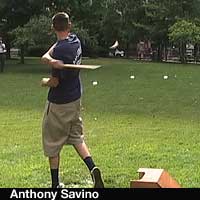 A carnival midway opened up at 6 p.m., as a mixer for the evening's costume banquet. Different tents ran nine carnival booths, and the room was full with delegates participating in the various games of chance. At the conclusion of the mixer, delegates proceeded upstairs to the hotel's ballroom for the first banquet.

Dressed as a circus ringleader, convention chairperson Rick Lindner formally greeted those attending the convention. The traditional Sons of the Desert toasts were given by members of the tents in Ohio.

Dwain Smith (Second Hundred Years Tent, Long Island) presented the founder's award to The Boobs in The Woods Tent of Clearwater, Florida (Oasis 59). Grand Sheik Ron Young accepted the award. Then Dwain presented a second award, on behalf of Sons' founder John McCabe, to Brad Farrell of the A-Haunting We Will Go Tent of Dayton, Ohio (Oasis 154). This award was to recognize Brad's contributions to the Sons of the Desert through his excellent publication, Dante's Info. He becomes only the third person in the Sons to receive this award. 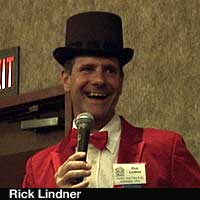 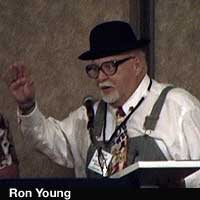 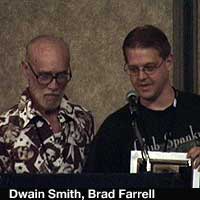 The results of the vote for the next convention were given, and it was announced that the Berth Marks Tent was the winner. The next International Convention will take place in Augusta, Georgia July 10-16, 2006, and will include excursions to nearby Harlem, birthplace of Oliver Hardy. It was also announced that Anthony Savino (Bacon Grabbers Tent, Chicago, IL) was the winner of the Pee-Wee Contest.

Convention delegates then proceeded to march across the stage in the traditional "Parade of Tents," giving each tent the chance to send their greetings to all and allowing everyone in attendance to see who else was there. After the banquet, the dealer's room and film room both reopened. 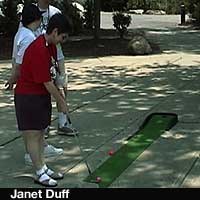 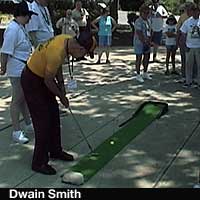 Busses left bright and early for the Columbus Zoo. Along the way, a brief tour of the downtown area was conducted. Delegates toured the zoo on their own, regrouping for a buffet lunch at the zoo's amphitheater. The Oliver Hardy Putting Tournament took place right after lunch, also at the amphitheater. It was conducted by Glenn and Tammi Campbell (Founding Tent, New York, NY). Conventioneers resumed viewing the sights, sounds, and smells of the zoo until around 3 p.m., when busses started their trip back to the hotel. As delegates returned to the hotel, there was time to find dinner on your own. 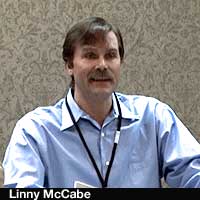 At 7 p.m., a group convened to hear a speech written by Sons founder John McCabe, and delivered by his son, Linny McCabe. The speech was called a" Serious Talk on Comedy." Afterwards, John McCabe was called on a speakerphone and took questions from the audience.

The program for the evening wrapped up with a 1940's Double Feature in the film room, featuring A-Haunting We Will Go and The Dancing Masters. The Dealer's room also reopened, and films continued late into the night. 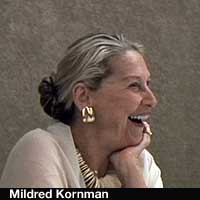 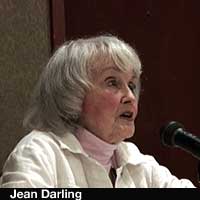 At 10 a.m., the celebrity guests took questions and answers from a room full of convention goers. Jean Darling and Mildred Kornman were the two celebrity guests attending the convention. Jean had previously attended the 2002 Convention in Nashville and Mildred had last attended a convention in 1980. They each spoke of their interesting careers. Both had been members of Our Gang. Jean Darling was also in Babes in Toyland as Curly Locks. Mildred Kornman made a few films with Oliver Hardy, including Thundering Fleas and Barnum & Ringling. Following questions and answers, the celebrities signed autographs for eager conventioneers.

After lunch, delegates walked to the nearby Ohio Theatre for a pre-show recital on the theater's pipe organ. That was followed by a matinee program featuring Big Business, Towed in a Hole, and Sons of the Desert. The 2,779 seat theater was very crowded during the program, attracting many locals in addition to convention goers. After the film, a tour of the theater was conducted.

Back at the hotel, the Laurel and Hardy trivia contest took place. Five teams of three people competed in over a dozen rounds of questions. The contest was conducted by long-time quizmaster Henry Sorenson (Going Bye-Bye Tent, Miami, FL) and first time assistant quizmaster John Duff (Early To Bed Tent, So. Pasadena, CA).

The final banquet of the convention took place later that evening. The ballroom was set up with two video screens, and much of the evening's program was presented on video. The first presentation was a two-minute video featuring clips from all 106 Laurel and Hardy films. Delegates who traveled from overseas were then asked to give the traditional toasts, beginning with Happy Harry Ingle (Berth Marks Tent, Ulverston, UK). Marshall Korby (Dancing Cuckoos, Detroit, MI) then lead the delegates in the singing of the Sons of the Desert song.

First to the stage was Linny McCabe, who introduced a video recorded by his father. In the video, John McCabe called for the reinstatement of the Stan Laurel Comedy Scholarship, introduced in the early days of the Sons of the Desert. 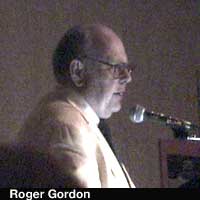 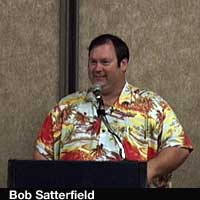 After dinner, Roger Gordon (Two Tars Tent, Philadelphia, PA) presented a retrospective of the Intra-Tent Journal. Roger was the first editor of the Journal in the 1970s, and today serves as its treasurer. His presentation included a video of highlights from celebrities who had been members of the Sons of the Desert, and were featured in early issues of the ITJ.

Next, Bob Satterfield took the stage to present a video retrospective of all the celebrity guests who have attended international conventions. Bob has been instrumental in getting many of these stars involved with the Sons of the Desert. The video included photos, clips, and audio of over fifty celebrities who worked with Laurel and Hardy or worked at the Hal Roach Studios. It was produced by Jim Wiley III (Way Out West Tent, Los Angeles, CA). Afterwards, the film room reopened and ran late into the night...as always. 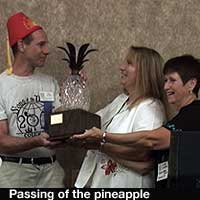 At 9 a.m., the Dealer's Room opened up one last time for some last minute bargains. The farewell brunch began an hour later, in the hotel ballroom. Following a deluxe breakfast buffet, the pineapple was passed from the Perfect Day Tent to the Berth Marks Tent. Denise Carter and Linda Caldwell received the crystal pineapple from Rick Lindner, showered by a flood of flashbulbs.

Glenn and Tammi Campbell presented Dwain Smith with the first place award for the Oliver Hardy Golf Tournament. And Lori Jones McCaffery (Way Out West Tent, Los Angeles, CA) announced Marshall Korby as the person who made the closest guess as to the number of jellybeans displayed during the Thursday night midway. As winner, he was presented with the entire bag of jellybeans. 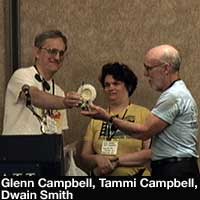 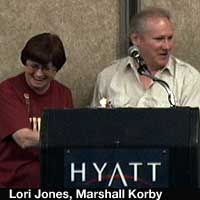 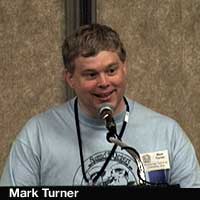 Photos of the 14 people who have attended all 14 International Conventions were then taken. They are: 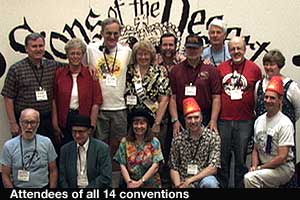 Convention co-chairs Mark Turner and Rick Lindner then took turns thanking those who helped them pull off a great convention. And with that, the convention was over.