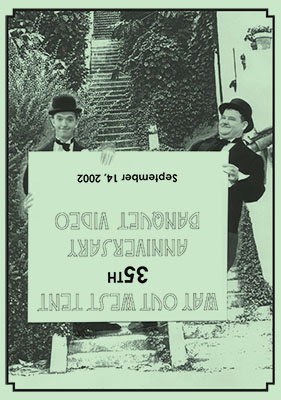 The main program on this DVD is a 20 minute documentary on the Music Box Steps. The documentary covers the origins of the use of the stairs in various films, finding the location of the steps, and a detailed then and now comparison of the entire flight of stairs. This documentary was produced for our 2002 annual banquet, which took place near the Music Box steps. It has been shown on many Laurel & Hardy location bus tours, including the recent Laurel and Hardywood Convention.

As a bonus, we have included approximately one hour of video from the Way Out West Tent 2002 annual banquet. Guests that appeared and spoke on camera were: Terry Moore (A-Haunting We Will Go), Trudy Marshall (The Dancing Masters), Edith Fellows (Our Gang, The Devil's Brother), Dorothy de Borba (Our Gang, The Stolen Jools, The Devil's Brother), Joan Del Mar (Nothing But Trouble), Jim MacGeorge (Stan Laurel Impersonator/Founding member of the Way Out West Tent), Mildred Kornman (Our Gang), and Billy Naylor (Our Gang). John Ratzenberger joined us as part of the Sons of the Desert Pipes and Drums marching band, and Leave it to Beaver's Frank Bank & Ken Osmond also shared some of their memories of Laurel & Hardy.

The total running time of this DVD is about one and a half hours.

106 Films and Sons of the Desert Celebrity Documenary DVD - $14 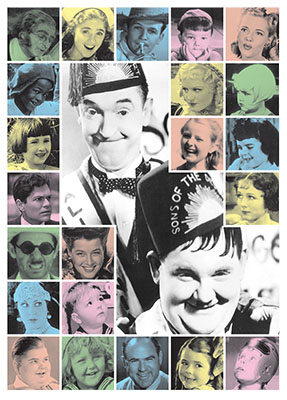 This DVD begins with a short video featuring clips from all 106 Laurel & Hardy films in a little over 2 minutes. It first premiered at the 2004 International Convention in Columbus, Ohio.

The main program on this DVD is a documentary featuring all celebrity guests who attended Sons of the Desert International Conventions between 1978-2002. The people featured on this video worked with Laurel & Hardy and/or at the Hal Roach Studios. It was produced for the 2004 International Convention in Columbus, Ohio. There are 53 celebrities featured and it runs about 40 minutes long.

The total running time of this DVD is about two hours. 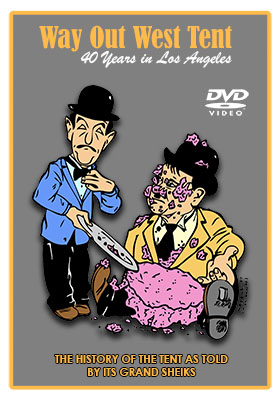 This DVD was produced in 2007 for our tent's 40th Anniversary. It features the history of our first forty years, as told by all eight of our tent's Grand Sheiks. The sheiks discuss the founding of the tent, the publication of Pratfall, the Hollywood 80 Convention, discovering and touring Laurel & Hardy locations, celebrity members of the tent, and other memories. The documentary incorporates rare film, video and photos from the collections of the Grand Sheiks.

The total running time of this DVD is about 45 minutes.